In pursuit of a WMass Soldiers’ Home fit for the future

It’s a short time in which to make a big impact, but Paul Barabani is a man on a mission. A mission to change the narrative about the Soldiers’ Home in Holyoke where he once served as superintendent.

The past three months of the COVID-19 coronavirus pandemic have flown by, marked each day, it seemed, by obituaries of veterans who died at the state-run nursing home and long-term care facility that sits atop Cherry Street hill in Holyoke, looking down on Interstate 91. The virus ravaged the home, claiming the lives of 76 men and women, some of whom Barabani knew as friends as well as residents of the home.

All the while, Barabani stayed the course, keeping a low profile, recognizing he was no longer the person in charge and not wanting to insert himself into the story. The Army National Guard veteran served as superintendent from 2011 through December 2015, when he resigned, citing the state’s failure to fund and staff the Soldiers’ Home properly. Then, as now, state veterans’ services secretary Francisco A. Urena and other state officials challenged that view.

Barabani watched from the sidelines with care and sympathy for the veterans, their families and, especially, he says, the staff who were affected by the virus. He kept to himself amid the creation of now five separate investigations into the home’s operations and virus response because “I had no first-hand knowledge of the situation.”

He listened as Urena and others criticized and then suspended his successor, Bennett W. Walsh, on March 30 on claims he had failed to advise them about the growing outbreak of the virus and the toll it was taking on residents and staff. (Walsh has denied those claims, and an attorney for him has provided emails and text messages detailing his communications during the month of March.) Barabani was silent until this week when, on Tuesday afternoon, he linked in online to listen to the meeting of the Soldiers’ Home trustees.

“I would have continued to keep a low profile, had it not been what I heard at that meeting,” Barabani said. “It motivated me to break my silence. I believe I have the knowledge they need.” What he heard that most concerned him was the chairman of the board, former Holyoke City Councilor Kevin Jourdain, cite a news report by a Boston TV station in asking about the status of a 2012, nearly $120 million plan to renovate and expand the home. And, then, there was a suggestion made by a state staff member for the Executive Office of Health & Human Services to conduct a new study of the needs of the Holyoke home.

“I was amazed. I couldn’t believe their source of information was a news article,” Barabani says. As the meeting proceeded, Barabani says he became more and more convinced he needed to step into the fray and offer whatever assistance he can to ensure a Soldiers’ Home for Western Massachusetts is preserved and improved to meet the 21st century needs of those it serves.

SEE SIMISON, PAGE C2 The 2012 plan called for the construction of a five-story addition that would provide a 120-bed, all private room facility, while the current structure would be renovated to provide one- and twoperson rooms, all based on a federal Department of Veterans Affairs approved concept. 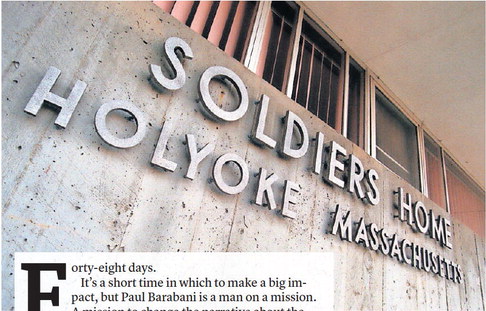 this,” he shared on Friday. He drafted and sent a letter to Jourdain in which he said he did not want to have “an adversarial relationship with the board.”

“I believe that we have a common goal: that of preserving the Soldiers’ Home in Holyoke for future generations of veterans to receive the care they have earned and providing an environment in which the staff can efficiently provide the loving care they are known for,” he stated in the letter.

He also outlined to Jourdain the need for action by July 31, including recalculation of the project’s costs, submission of revised figures and verification the state will provide the needed matching funds (35% of the costs), so the project can be considered for federal VA funding in fiscal 2021. “I know of no significant change in the building that would impact the ability to go forward with the 2012 plan,” Barabani said.

Barabani is not alone in the mission he’s undertaking. He’s backed by many more like-minded men and women from all across Western Massachusetts and beyond who are expected to announce this coming week their united efforts to garner the support of the entire state Legislature, local, state and federal leaders and the community at large. They are veterans and children of veterans. They are municipal veterans agents and members of veterans organizations.

The COVID-19 outbreak has been the deepest wound and the saddest of chapters in the history of the Soldiers’ Home that opened in 1952, and Barabani says he hopes it can become but a footnote to a legacy of outstanding care for the veterans who use the home.

In the wake of Tuesday’s trustees’ meeting, Barabani reached out to the contact at the U.S. Department of Veterans Affairs with whom he first worked on the project, and learned the Soldiers’ Home proposal remains on an active list for 65% reimbursement funding.

To conduct a new study, Barabani contends is just adding unnecessary time to what is an immediate need to move the home forward. “Any time I hear ‘study’ coming out of a bureaucrat’s mouth, it’s just a matter of delay,” he said.

The 2012 plan called for the construction of a five-story addition that would provide a 120-bed, all private room facility, while the current structure would be renovated to provide one- and two-person rooms, all based on a federal Department of Veterans Affairs approved concept. The project would see the home transformed into a 258-bed facility, according to Barabani.

As the losses of the home’s residents mounted and the infection wreaked havoc with the staff over the past months, Barabani said he “felt a little remorse, knowing that that facility contributed to the spread of the virus and had I been able to convince state and get their support eight years ago, it might have slowed the spread.”

Now, he says, “I want to be part of the solution, to atone for the failure of state government to do the right thing in 2013 and take advantage of this opportunity to make things right – right for the families of the veterans who died, right for the incredibly dedicated staff who had to work in those conditions and right for future generations of veterans who will need that home.”

Barabani says he’ll leave the determination of what went awry at the home to the state and federal investigators who are probing the virus outbreak at the Soldiers’ Home. “My focus for right now and the next 48 days to get the state to do what they should have done,” he said.

“Right now, a community of veterans and families members are ready to advocate for the home,” he explained. An announcement later this coming week will share a website that’s being developed to provide information to the public and share drawings and details of what a future Soldiers’ Home might look like.

“We will try to motivate individuals throughout the state to support a Soldiers’ Home for the future in Western Massachusetts. If we are successful in achieving our goal in getting that plan approved, that’s the best monument to memorialize those people who died during this time of the coronavirus,” he said.

“We have a path we can follow to accomplish this. The question is can the Legislature and the trustees have the will to make this happen?”

Cynthia G. Simison is executive editor of The Republican. She may be reached by email to csimison@repub.com. 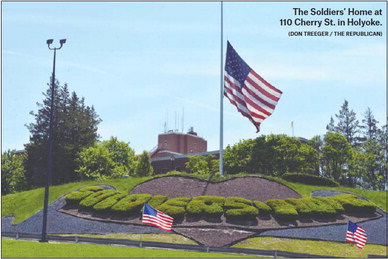 The Soldiers’ Home at 110 Cherry St. in Holyoke.

Click here to see this page in the eEdition: